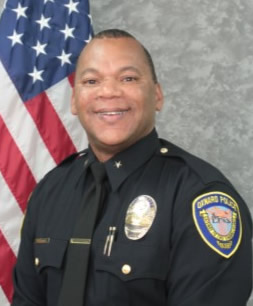 Oxnard Police Officer Randy Latimer began his career with the Oxnard Police Department in 1984 as a Traffic Cadet. He was hired by the Ventura County Sheriff’s Office in 1986 where he worked in the Ventura County Jail for two years. He returned to the Oxnard Police Department in 1988. During his career, he has worked various assignments which include Bike Patrol Officer and Instructor, Motor Officer, SWAT, P.A.L Officer, School Resource Officer, Violent Crimes Task Force Detective, Traffic Coordinator, Patrol Sergeant, Special Services Sergeant, Trauma Support Team Sergeant, and Traffic Unit Sergeant. He was promoted to the rank of Police Commander in 2013.

Commander Latimer serves as the Special Projects Commander where he oversees the Traffic Unit, Booking Unit, Community Service Officers, Animal Safety Unit, and all special events. Commander Latimer currently serves as a Board Member for the Police Activities League (P.A.L.) and volunteers at local youth sports organizations, schools, church, and civic organizations. In 2001, he received the “Medal of Merit” from the Ventura County Peace Officers Association and the “Presidential Award of Merit” from the California State School Resources Officers Association for his actions during a hostage situation at a local high school. He was nominated for “Officer of the Year” in 2001 and 2002 and was selected as the Knights of Columbus “Officer of the Year” in 2011. As the Traffic Unit Sergeant, he led the Ventura County AVOID the 14 DUI Campaign and ushered in several innovate traffic safety programs.

He holds a Bachelor’s Degree in Criminal Justice Management from the Union Institute and University and is a graduate of the Sherman Block Supervisory Leadership Institute. He is also a graduate of the Ventura County Leadership Academy. He is certified private pilot and enjoys donating his time to educate young aspiring pilots. He is a life-long resident of the City of Oxnard and is married with two children.