Community Policing is a broad term used in law enforcement. The definition and application of this concept varies widely from agency to agency. In Oxnard, community policing is not just regarded as a term or concept, but is an ingrained part of agency culture.

Community Policing is the responsibility of every member of the Department, and is led by four teams. Patrol officers remain in the same beat for six-month deployments and are part of a “beat team” which regularly meets and communicates on beat issues with the district teams. As mentioned earlier, Beat Coordinators provide front line leadership for problem-solving efforts.

Beat Coordinators organized and attended numerous meetings and special events, which served as forums for positive interaction between police and the public. These gatherings provided an opportunity to educate community members regarding crime prevention and other important public safety topics. This also afforded the beat teams the ability to hear the concerns directly from their respective community members.

In 2013, the Department added two new policing beats to accommodate city growth. This addition included a reconfiguration of existing beats, taking into consideration such factors as travel routes, official neighborhood boundaries, service call volume, and reported crime rates. With the addition of two new beats, officers are now in a better position to meet the demands, which included an increase in traffic, calls for service, and quality of life issues. The additional beats have also permitted officers more time to proactively address problems in their respective beats. The geographic alteration of Districts 1 and 2 have also shortened response times and allowed for more directed enforcement, including gang suppression and traffic enforcement.

The beat teams continued to address crime and quality of life issues through established partnerships with community organizations and neighborhood watch groups. In 2013, increased emphasis was placed on encouraging neighborhoods to develop communication networks, such as through Nextdoor.com. The development of strong working relationships between the Department and members of the community remains a priority. This is seen as a critical relationship, as the City experienced crime rate increases in 2013. 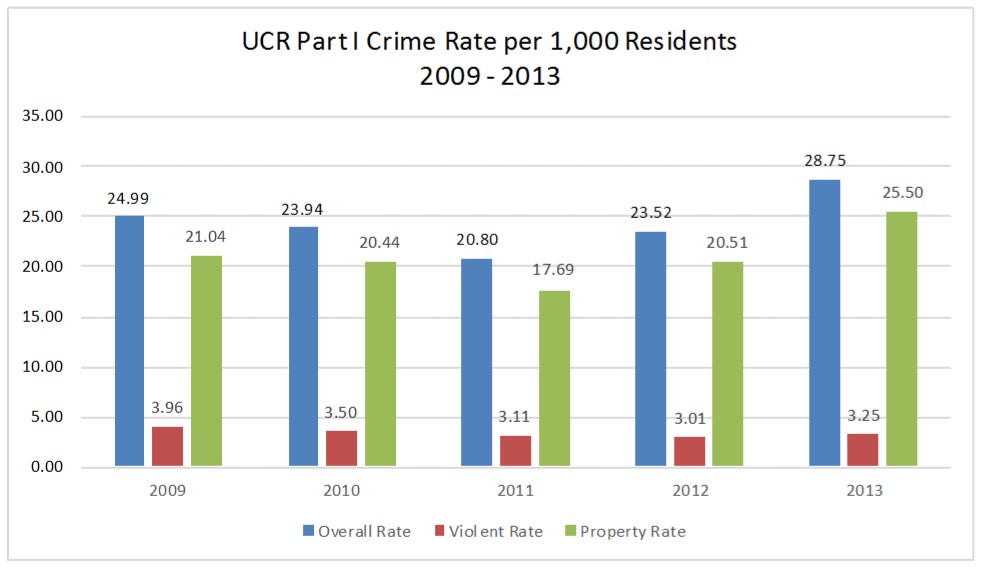