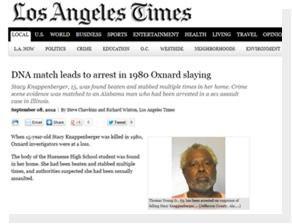 During the afternoon hours of July 30, 1980, Oxnard Police Officers responded to a call for service in the 5300 block of South J Street.  When officers arrived at the residence, they located then 15 year old Stacy Knappenberger dead on the floor of the home’s master bedroom. Stacy had been found by her mother, Judy Knappenberger, after Judy returned home from work.  An examination of the crime scene by investigators, as well as an examination of Stacy’s body by Ventura County Assistant Medical Examiner Dr. Peter Speth, resulted in Stacy’s death being ruled a homicide. Evidence also suggested that Stacy had been the victim of a sexual assault.