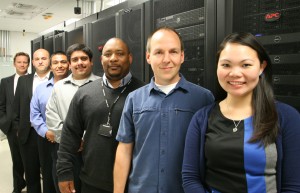 The Information Technology Division (IT) for the Oxnard Police Department provides a wide array of technology services for the Public Safety employees of the City of Oxnard, including the Police Department, Fire Department, Animal Control, and Code Compliance. The services span desktop-to-mobile-to-server computing needs, various wired and wireless networks, telecommunications, radio, internet connectivity, administrative and financial systems as well as video surveillance. The IT Division is staffed by one manager, one Programmer Analyst, and five Computer Network Engineers. One previously filled Programmer Analyst position and one Computer Network Engineer position are currently vacant.

IT oversees the implementation and maintenance of a comprehensive suite of public safety hardware and software. This includes the City’s 9-1-1 Call Center’s Computer Aided Dispatch (CAD) software and Records Management System (RMS) for Police and Fire and the Mobile Data Computers (MDC) for police and fire vehicles.

Although most public safety systems are housed in the facility at 251 South “C” Street, there are sixteen other remote locations supported by our IT Division. These include the Police Activities League (PAL), Student Truancy Offender Program (STOP) office, six police storefronts, seven fire stations, the police annex on Sturgis Road, and the Mobile Command Post. One additional new police storefront will open in the Collection shopping center in June of 2014. Each of these locations requires the ability to connect to systems housed on “C” Street using a secure network connection.

IT works with the US Department of Justice, State of California, County of Ventura, City of Oxnard, local businesses and private individuals to define, develop, and implement new systems. At the same time, IT must continue to provide service for current systems and work with those whom they support to migrate users from older technologies or integrate the new technologies with the legacy systems.

CAD / RMS / MDC System Implementation
During September, all of the City’s public safety software and hardware systems were replaced with a new, fully-integrated CAD/RMS system provided by New World Systems. This provided a reliable platform for dispatch operations with automated coordination between dispatchers and field staff. Employees also benefited from the user-friendly single point of entry for records, accurate reporting, updated mapping and crime analysis. The capability for efficient interfaces with city, county and state databases is gained through interoperability that is compliant with federal standards. This system supports a high level of response to calls for service while providing critical decision information for all users, from police officers and fire fighters to executive managers.

Computer Virtualization
Increased efficiencies in desktop and server computing systems have proliferated greatly for public safety IT by deploying virtual, rather than actual physical devices, for hundreds of computing needs. Advances in these technologies in the past year allow multiple users to access and share software licenses as needed rather than deploying a license to each user.