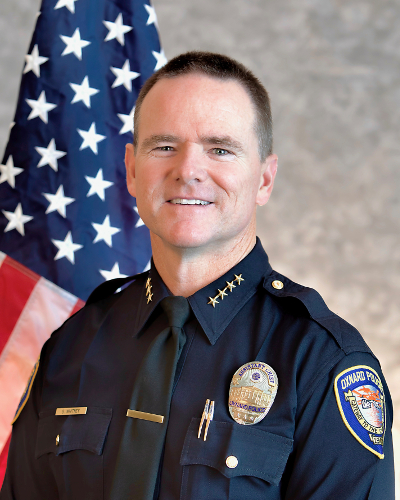 Scott Whitney is Oxnard’s 21st Chief of Police. He brings comprehensive experience in project management, collaboration, policy implementation, program expansion, budget development and strategic planning. Chief Whitney began his career with the Oxnard Police Department in 1990. Scott moved up through the ranks over his 25 years with the Department and spent nine years as an assistant chief of police. Chief Whitney’s career took an interesting turn in 2014 when he was asked to serve as an assistant city manager. As an assistant city manager, Scott was responsible for leadership of the Public Works Department, the Development Services Department, Economic Development and the Housing Department. Scott returned to the Oxnard Police Department in September 2016 as the chief of police.

Chief Whitney learned firsthand the great benefits of community policing with his assignment to the City’s first storefront in the Colonia neighborhood in 1992. He has a passion for protecting  vulnerable populations and was instrumental in creating the countywide CIT Program (Crisis Intervention Training), for persons suffering from a mental illness, and the PRYDE (Partnerships and Resources for Youth Development and Education) Mentoring Program.

Chief Whitney has extensive experience in all three bureaus (Field Services, Investigative Services, Administrative Services) within the Department. He spent much of his career working within Special Operations as a sergeant and then as a commander. Within Special Operations, Scott oversaw the Violent Crimes Task Force, Special Enforcement Unit, SWAT Team, Gang Violence Suppression Project and K9 Unit.

Scott works with many community-based organizations and has served on many advisory / leadership boards, including: Interface Children and Family Services, Ventura County Mental Health Advisory Board, Juvenile Detention Alternatives Initiative, Oxnard Chamber of Commerce, Parents of Murdered Children, Ventura County Leadership Academy and the Board of State and Community Corrections.